One thing that’s been on Draco’s todo list for a while is “transfer Poke”.  It was written on a sticky note actually. The meaning of “transfer Poke” is that Draco has Pokemon across a variety of games and Draco would like to transfer them all to the current game. Draco put this off due to very inefficient transfer systems but because Draco finally used Pokemon Bank the task became easier. Pokemon Bank is extremely good; when compared to the old ways at least. Draco was hesitant because the old ways were free but then Draco found out that the price was well worth it and not a monthly fee like Draco thought. The next problem was that Pokemon Bank doesn’t work for all of the games. Draco was really into the games when Diamond came out so most of them were supposed to be there and that meant that Draco really only had to transfer them from Diamond into Black then Draco could use the Bank.

The transfer from Diamond to Black involves a crossbow for some reason. 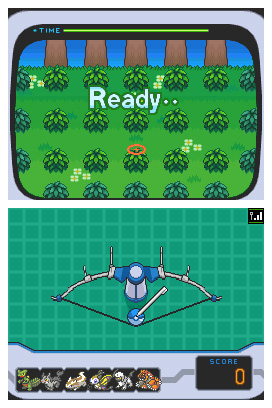 This sadly only allows for 6 at a time and doing only the Pokemon Draco really liked took hours and because it’s timed you can actually fail to get all of them which means you have to do it again. Thankfully it’s a little bit fun.

After doing this for a while Draco realized many Pokemon were missing. Everything really should have been in Diamond except the ones from Crystal because they’re all a bunch of mean jerks( They did just remaster it though and transferring from the remaster is very easy). Anyway after thinking a bit Draco figured out where the missing Pokes were.

“My Pokemon Ranch” for the Wii was essentially a screen saver / storage system but Draco as a young person was happy to shove all this Pokes into it to see their kinda cute style. It’s a shame. Draco really liked how if you got enough of the same Pokemon in they’d form a little gang and if they met another gang of a type they’re weak against they’d have a kind of rivalry going on. There were some good ideas in this game but ultimately it didn’t really go anywhere just like a lot of the ideas that have been in Pokemon games. Anyway, Draco had almost 800 Pokemon in this game. Many of them were Ponyta. Draco left most of the duplicates. Somehow Draco didn’t take a Ponyta and now feels pretty dumb. Each time one was taken from the ranch a whistle noise happened. Draco blames the turbulent feelings and whistling noises for forgetting a Ponyta.

So after getting probably around 240 of the Pokemon out Draco began the process of crossbowing them all into Black. With honed skill it was a peace of time-consuming cake. Unfortunately Draco didn’t realize that in order to send them to the bank Draco had to have them in Box 1. Each box can hold 30. The first box was easy. but then you have to move those 30 from the bank transfer box into another box which requires switching  cartridges. Then, after switching cartridges again, each subsequent box had to be moved to Box 1 one at a time. Once Box 1 was refilled we’d repeat. In total this took about 10 hours across a few days and according to the bank’s records Draco actually has 409 unique Pokemon and Draco has recorded 664 of the 806 which exist. Of those 255 there could be pre-evolution forms or it could be Pokemon other people had. There isn’t a way to tell sadly and it doesn’t seem particularly intelligent about it( They knew Draco had a Squirtle and a Blastoise and that Draco didn’t get the Blastoise through trade but Wartortle is missing). This also isn’t including Ponyta which Draco has hundreds of. Surprisingly none are shiny. Draco will have to rectify the slanderous lies of lacking Ponyta but that can be done later.

What this has really taught Draco is that there are soooooooooo many Pokemon. It’s amazing but also impractical. Some poor 10-year-old is probably trying to catch them all right now and they won’t be finished till they’re in their 806s because they’ll live that long; yay science. And imagine if someone wanted all shinies. Draco just Googled that and apparently it took someone 3 years but that was a post from 2016 so they might not have the newest of the shinies. Maybe the previous 796 year guess was a bit much but still. This is the type of thing Draco’d do for sure if he were a vampire. It’s that along with reading all the books worth reading and watching a shōnen anime. Things that take a lifetime, you know. Ah, if only.

Draco would like a shiny Ponyta. Apparently there aren’t Ponyta in Sun, Moon, or their Ultra counterparts… Draco’d have to transfer to get one… sigh… Ellipses… … …

It should also be noted that Draco’s is favorite Pokemon as some of you may already know, is Cyndaquil. Some of you were probably thinking Ponyta and Ponyta is great but Cyndaquil is number 1. It just needed to be said. There can be NO MISTAKES.

The following post is brought to you by Labronbrium! A new fuel source that will replace electricity in a matter of years!

So Draco was watching Dimension W which is an anime currently airing on Toonami. Its set in the future and it remind Draco of a major pet peeve with sci-fi and beyond. This problem is not at its worst in Dimension W, they make up for it with other things. The following will be more about generic less popular series. It exists in big name series but we’re going for a general overview.

So it’s the future and magically in the future they find some new power source that is the best dang power source in the world. It powers your car, your house, your children, your dog, your gardener, your potatoes, basically everything.  That’s all well and good but then for some reason it’s literally all they talk about. It’s great that they have this stuff but think about real life. When is the last time you talked about the wonders of electricity in casual conversation with a friend? These are shallow attempts to dump exposition and differentiate the world from the real world. All it really does though is take up valuable dialogue space with cheesy almost product placement like imaginary battery talk. If you’re writing sci-fi or anything and want to tell everyone about some magic energy, either show (as in show don’t tell) the tech in action or bite the bullet and say it once or twice… unless they just discovered the technology. Draco still remembers a time when cell phones hadn’t dropped the “cell” and electric toothbrushes hadn’t dropped the “electric”. It’s overuse that makes this annoying. If electricity just came out and Draco was talking to some friends maybe Draco would talk about an electric lamp or whatever but then other matters like horse grooming, arranged marriages,  and sword fighting must be discussed. Don’t let the lamp take up your characters’ lives, sci-fi writers!

Labronbrium isn’t real by the way. It probably should have been obvious from the theme of the post but it should really be made clear. Also no one sponsors us even though they totally should!

We’ve entered our second year of Dracoblag and to start things off we will summarize for you, the reader, all the important things that happened last time(based on statistics and opinion). The most important topic on Dracoblag that you need to know about is Home page/ Archives. While it is not an actual topic and the statistic tells nothing of what people are looking at it is still really popular. It is so popular Draco could just cut everything else out and still have around 80% of the readership.

1.in the next seat we have the God’s Not Dead commercial review. This post really does encapsulate the spirit of Dracoblag for sure. We took apart this movie with fact and with common sense in a completely unbiased fashion.  It’s clear why this was the most popular post(No it’s not, there were way better posts but oh well that is the power of star power).

2. The first bit of Dracoblag was that we never mentioned Felicia Day once. It was a time when all of the internet would occasionally mention her somewhere. Not Dracoblag though we stuck to other topics and made it an entire year without even having her name in a single post. This is a tradition we will carry well into the future. Remember you will never see the name Felicia Day even once on Dracoblag. That’s a fact.

3. When Draco realized Microsoft was the real life Abstergo from Assassin’s Creed based on their logo it was a scary time. There were guys in suits everywhere and a few ladies too. It was scary how few women were hired to intimidate Draco. Honestly there are millions of women who are well qualified to intimidate Draco with their toughness but they only hire old men from the Reagan era. It’s unfair.

4.Draco’s adventures in space will always be cherished by Draco and the maybe 6 people who read about them.  Even more so now that Draco owns Outer Space. If one thing was to be learned it’s that Chicago has a large amount of beautiful lady people and Winter’s Tale is such a good movie it can keep you from dying. That was two things but odds are you didn’t even notice. Bet you didn’t notice the part where it explains you didn’t notice either.

5. The Whale… We’re not going to talk about it…

6.Remember that time Draco wrote a review blog to avoid having to come up with a real post. Oh the laughs you and Draco had. It was splendid. That hilarious part where Draco realized this was getting long and reviews are the worst episodes of a show so it needed to end. Ya that was great.

First, This post is taking way too long to write…

Second, Draco can’t remember why searching is in the title… The scrolling is from the wheelie thing on the mouse making Draco look stupid. So there was thus online syllabus and Draco needee info. Draco checked but didn’t see it. Turns out there was like 5 more pages…

Additionally for that class, one student who shall henceforth be known as Re’llywaup, got to write on wordpress instead of doing some assignments. Draco would have loved that option.

In better news, Draco played Pikmin 3 for about an hour last night. So far it’s very good. The time limit is annoying though. In starcraft ii Draco was the zerg player who would let the other player survive so that Draco could cover the map in creep. Draco doesn’t like time limits. and Pikmin’s doesn’t make sense. Two of the characters survived unscathed.

The Ancient Draconian Archives of Latin-Sounding-Word-ica